From Seedlings to Christmas Trees:

Our seedlings are planted in the spring and are about 1’ – 2’ in height and two to three years old. The seedlings get their start in the northwest. They are planted by hand once the ground has been de-stumped and cultivated. Pictured here is a picture of a newly planted field.

The Noble Fir is a native tree to Washington State’s Coastal and Cascade ranges as well as Northern California Siskiyou Mountains. It is quite famous for its open, stiff branches, which are perfect for holding up the more substantial ornaments. The Noble Fir’s needles are about 1 inch long and are a beautiful blue/green with a touch of silver to them. Usually, the needles of a Noble Fir twist upwards showing the lower surface of the branches. The Noble Fir tree has a reputation for staying fresh for an extended period.

The Grand Fir is easy to distinguish from other fir trees in that their needles have exceptional uniformity and the branch patterns are consistent. Their needles, 1 to 1½ inches in length, are in 2 rows often spread horizontally so that one can see both the lower and upper portions of the branches. The Grand Fir needles are soft to the touch, and dark green with a sheen of white stomata on the lower part of its branches. The Grand Fir grows well in the Pacific Northwest, growing up to 300 feet tall, the tallest of firs.

The Turkish Fir is native to northern Turkey and is now being grown as Christmas trees in the US. Turkish fir is sometimes confused with Nordman fir but is a very different species and entirely different. The main difference is that the needles are flatter on the stem. Turkish needles radiate out more from the stem. This tree has needles that have a dark silvery-green underside, which is very attractive and gives the tree a unique tow-tone shimmery look. Turkish firs are becoming popular with consumers. Its sturdy branches will hold heavy ornaments, and needles are retained for a long time indoors if the tree is kept watered.

The Douglas Fir is a favorite tree in the Pacific Northwest. It has been around for generations and is often considered by some like the traditional Christmas tree. The Douglas Fir has a pyramid shape, and when its needles are crushed, they are quite fragrant. The needles are a dark green or blue-green and are soft, about 1 inch in length and densely set. The Douglas Fir grows in an extensive range of environments, dry to moist, and in lower elevations.

The Nordmann Fir is among the most beautiful conifers found anywhere. Nordmann fir is by far the most popular Christmas tree species in Europe, and there is increased interest in the species in the United States. The popularity of this species is due to several factors. First and foremost are the glossy, dark green needles, which are darker than almost any fir except for grand fir (Abies grandis). Nordmann fir needles are directed forward giving the upper surface of the branches a brushed, smooth appearance. 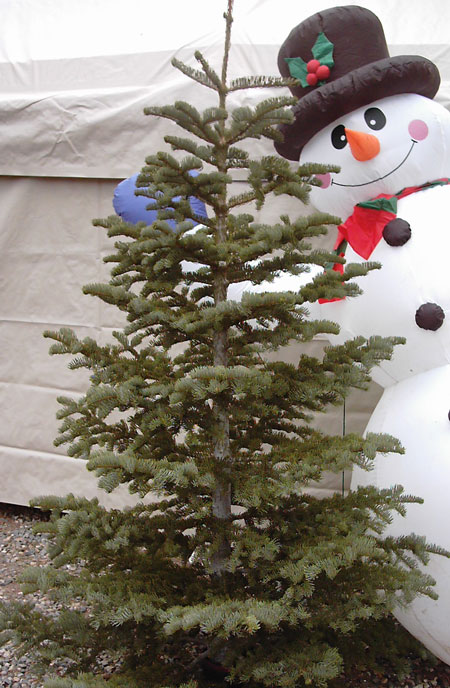 Silver Tip and Natural Noble trees have pointy needles with strong branches but the branches have large gaps in between so you can see the silver trunk of the tree. These trees are great for large and heavy ornaments.